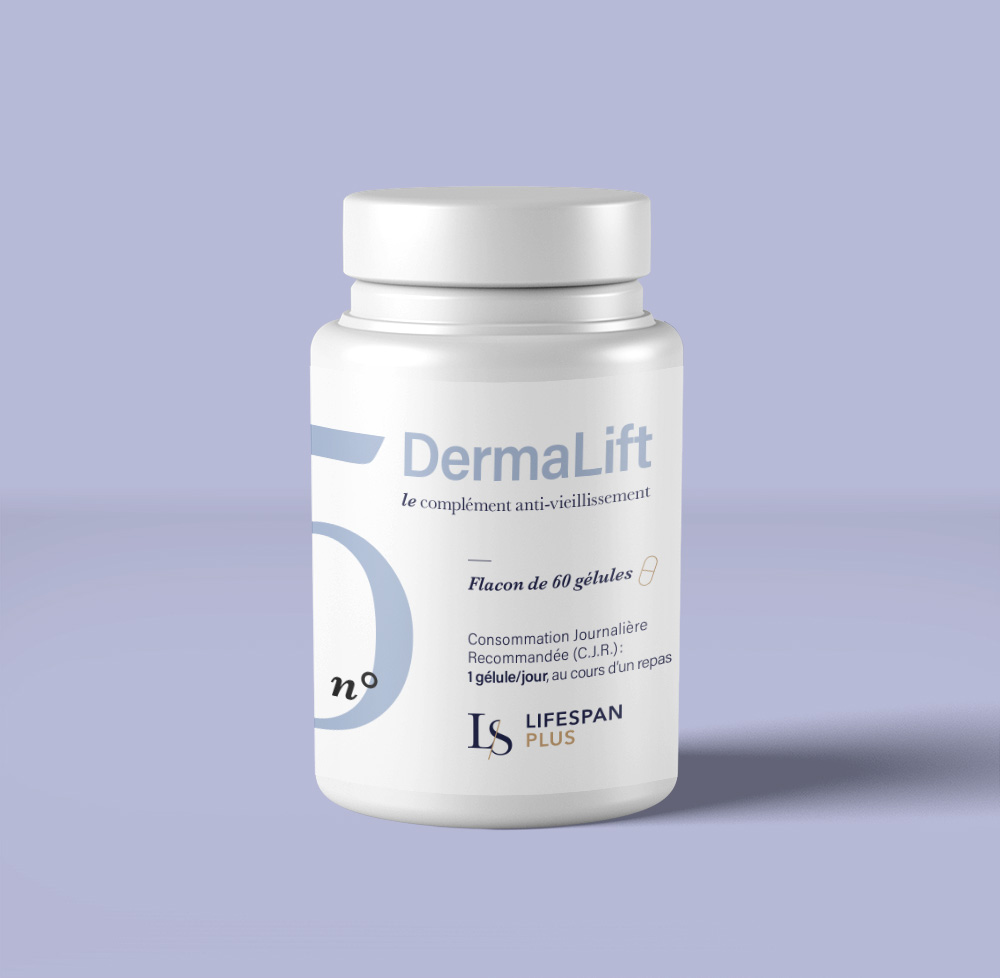 - Neutralizes the free radicals that cause skin aging.
- Reduces wrinkles.
- Brings firmness to the skin.
- Boosts the energy of skin cells.
- Helps the synthesis of collagen and keratin in the body.

We do not claim to perform a real facelift through the use of dietary supplements. However, there is growing evidence that a healthy lifestyle coupled with a toxic-free diet and the use of food supplements can help you stay younger longer. With this in mind, the formula of Dermalift has been developed with an "anti-aging" effect that is precisely oriented towards the skin.

The primary objective of this product is to fight against aging and the wrinkles that accompany it. Women and men of a certain age who care about it on a daily basis and are likely to find it a help of choice.

This effective anti-ageing food complement contributes to fight against the appearance of the wrinkles, to preserve a young, tonic and healthy skin. By protecting collagen from oxidative stress due to pollution, UV rays and advancing age, it helps maintain its elasticity, the elasticity responsible for the suppleness, tone and beauty of the skin.

Effect of the different Dermalift components

Hyaluronic acid is known in aesthetic circles for its rehydrating and "plumping" properties on the skin. We all know that the advancing age causes a progressive weakening and drying of the skin, so the tissues slacken and often the face is hollowed out. Like a sponge, hyaluronic acid retains water in the heart of the intercellular spaces, which helps to restore moisture and tone to the skin.

In order to mitigate these phenomena, some recommend taking it as early as age 30. This molecule also promotes its reconstruction. Endowed with an antioxidant action, hyaluronic acid contributes to UV protection.

Collagen is a protein molecule that structures connective tissue such as cartilage and skin. It is present in a proportion of approximately 25 to 30%. This element reinforces the cohesion, elasticity and resistance of connective tissue, but it also participates in its regeneration.

Unfortunately, its natural production progressively decreases after 25 years. This reduction accelerates from the age of 40 to reach a proportion of 35% at the age of 60. It is marine collagen that is the most compatible with the tissues of the human body. It is useful for maintaining the integrity of cartilage, and helps to reduce damage and restructure it. Thus, it very often participates in the reduction of joint genes.

Just like hyaluronic acid, marine collagen is a powerful antioxidant which allows it to neutralize free radicals and thus help to reduce wrinkles and fine lines and slow the appearance of the marks of time passing. Its supplementation contributes to maintain the firmness, tonicity and radiance of the skin.

Or "Japanese knotweed" is an Asian plant known for its richness in resveratrol. Resveratrol is itself known for its powerful antioxidant properties. The Polygonum cuspidatum has hollow and fibrous stems comparable to those of bamboo canes, but it is especially the rhizome of this plant that concentrates this active ingredient (20 to 50 times more resveratrol than the other parts). Resveratrol, present in red grape skins and in wine, mainly of biological origin and untreated, has been especially illustrated in the study of the French paradox (lower incidence of cardiac accidents in France).

Reduced Coenzyme Q10 and Alpha R Lipoïc Acid are 3 extremely antioxidant molecules that accentuate the "anti-aging" action of the three previous components. All three contribute to increasing cellular energy production and regulating the optimal functioning of all cells, including those of the skin.

The Rhodiola Rosea was already used by the Vikings to rekindle their strength and give them courage in their efforts. In the post-war years, the Russians brought back to light the tonic, fortifying and invigorating virtues of this adaptogenic plant. Rhodiola Rosea is known for its multiple tonic, fortifying and invigorating virtues. The various active ingredients it contains, including rosavin recognized as an antioxidant, give it a proven action to mitigate the effects of skin aging, among others.

Zinc is an indispensable ally of the skin. It contributes to activate the cellular division and thus to renew the upper layers and to protect them from ageing and pollution thanks to its antioxidant effect. Useful for the functioning of the immune system, it also participates in the fixation of phosphorus in the bones and the balance of the hormonal system. It helps to regulate sebum secretions. Associated with vitamin B6, it supports the flexibility of the skin, as well as the synthesis of collagen and keratin, two proteins essential to the good balance of this tissue.

Vitamin E (alpha tocopherol) known to fight against the aggressiveness of free radicals is naturally present in the sebum secreted by the sebaceous glands of the skin. One of its main roles is to prevent the deterioration of the skin's collagen and elastin fibers, which is the cause of wrinkles and loss of elasticity. As with many functions in the body, the activity of the sebaceous glands gradually slows down with age and the skin then tends to dry out, wrinkle and become more sensitive to external aggressions and free radicals. A daily intake of vitamin E helps to avoid all of these phenomena.

Vitamin B2 (riboflavin) is known for its antioxidant (anti-aging) effects which are all the more powerful when combined with glutathione, which is the case in this formulation. It is known that the tendency to become overweight and the loss of energy generally increases with age, all the more so if one tends to consume sugars. Riboflavin acts in the sense of regulating the metabolism of sugars, proteins and fats by ensuring that the energy supplied to the body is optimized. When consumed, positive effects have also been observed in the eye and vision.

Vitamin B3 (niacin or nicotinic acid) also helps to improve the metabolism of fats in the blood, which has a protective effect from a cardiovascular point of view. It is normal for the skin to lose some of its elasticity with age, but it has been shown that some wrinkles (especially a marked line in the earlobe) are more pronounced (40% more) in people with cardiovascular problems.

Vitamin B6 (pyridoxine) is for its part more oriented towards the metabolic regulation of amino acids and proteins; proteins contribute to the integrity of the connective tissues of which the support network of the skin tissue is largely made up. Positive effects have also been observed in acne problems.

Indications : Anti-ageing (mainly on the skin)

Another phenomenon called "glycation" will be attenuated by resveratrol. This is the hardening of skin fibers. This is accentuated by sugar. This accentuates the depth of wrinkles and accelerates the loss of elasticity and firmness of the skin. The consumption of sugars such as ribose, for example, can lead to what specialists call the "caramelization of the skin", which is none other than the phenomenon of glycation, a marker of senescence. It is now known that resveratrol helps to reduce it.

One last thing is worth mentioning, this active ingredient helps to stimulate the skin's natural defenses, as well as promoting the synthesis of endogenous enzymatic antioxidants, components generated by the body itself.

Capsules are the ideal form of consumption of resveratrol. Without any side effects, it can be taken over the long term or as a one-off treatment.

1 capsule per day during meals.

This is a preview of the recently viewed products by the user.
Once the user has seen at least one product this snippet will be visible.