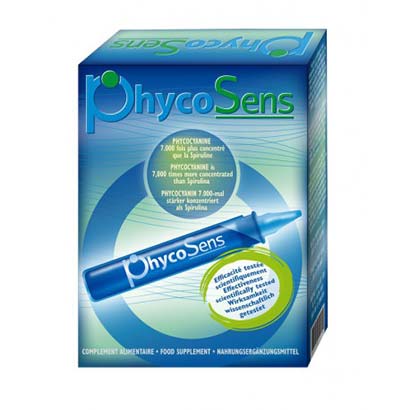 Phycosens is a powerful antioxidant based on phycocyanin, extracted from spirulina. It is also detoxifying, regulates cholesterol levels and helps maintain vitality

Phycosens, the blue gold of spirulina

Phycosens is a natural food supplement composed of phycocyanin, a blue pigment found in certain algae including spirulina. Phycocyanine, the main element of spirulina, is extracted from fresh spirulina, which gives it multiple properties for the well-being and the organism.

Phycocyanin is one of the most important pigments in spirulina. This product is a real gem for health because of its multiple benefits. The precise dosage of Phycosens allows one of the best contributions of phycocyanin, therefore spirulina.

Characteristic of Phycosens, the blue gold of spirulina

Phycocyanin helps to maintain good energy and vitality, so it can be recommended in cases of fatigue, lack of iron, or recovery after intensive physical efforts.

Spirulina and phycocyanin, why take it?

Phycocyanine, a jewel of blue color, is the blue gold of spirulina. These preventive, protective and antioxidant properties contribute to general well-being. This food supplement can be advised for all, whatever the state of health and it can be associated with other natural products as well as with chemical molecules. It has proven to be very effective in the face of many common problems and disorders, but also more advanced ones.

Phycocyanin seems 6000 to 7000 times more active than Spirulina itself and 20 times more powerful than Vitamin C. Phycosens based on phycocyanin constitutes a real "treasure for the well-being" and a food supplement with multiple and powerful effects.

The different virtues of spirulina

The action of phycocyanin on the liver

Detoxifying and hepatoprotective, phycocyanin helps the body get rid of toxins. Chemicals are numerous in our lives, both in the air and in food, a natural detoxification is necessary several times a year. For this, an action on the liver seems to be a priority. In the case of phycocyanin, it binds to bile acids to act significantly on the increase in fecal excretion of cholesterol and bile acids.

For a detoxification of the organism from heavy metals, phycocyanin has an undeniable chelation capacity. Therefore, by binding to the polysaccharides of phycocyanin, heavy metals are easily eliminated from the body.

The action of phycocyanin on the immune system

Phycocyanin is a modulator of immunity. It is said to be an immunomodulator. As a result, it considerably reduces and eliminates allergic-type inflammation. Its intake does not alter in any way the stomach function. Indeed, even taken over the long term, phycocyanin does not damage the stomach.

The antioxidant action of phycocyanin to fight against stress

The body is constantly fighting against the effects of free radicals that cause oxidation inside the human body. Natural antioxidants diminish with age, thus limiting this inner fight against cell aging. Phycocyanine is a perfect food supplement to maintain a good anti-free radical health. This food complement is ideal in the event of oxidative stress.

The action of phycocyanin on diabetes

Phycocyanin helps to lower the blood sugar level. Therefore, type 2 diabetics see this blue gold as a quality accompaniment. Indeed, phycocyanin would also help to fight against the complications related to this disease.

The action of phycocyanin on the thyroid gland

Phycocyanin is a new hope for all people suffering from thyroid disease. In hypothyroidism, phycocyanin has a natural regulatory action. In case of Hashimoto's disease, its action on the immune system, in association with moducare, could help the patient to feel better on a daily basis. No solution is proposed for hyperthyroidism.

The action of phycocyanin on the heart

Phycocyanin contributes to good cardiovascular health. As a result, it prevents heart-related diseases. Anti-cholesterol and anticoagulant, it prevents the risk of heart attacks and strokes. Its action is obviously preventive.

The antiviral action of phycocyanin

Associated with spirulina, phycocyanin acts effectively against the viruses it inhibits. In addition, its potency prevents the replication of the AIDS virus.

The action of phycocyanin on the kidneys

A cure of phycocyanin would prevent the appearance of kidney stones for people who are sensitive to it. In addition, its overall detoxifying action would help the kidneys get rid of all organic toxicity, such as traces of mercury or any other medication.

The action of phycocyanin on leukemia and cancer

Phycocyanin stops the proliferation of cells that are dangerous for the body. It is said to be a powerful inhibitor of cell growth. Therefore, it would be a hope for the future. In addition, phycocyanin allows to improve enzymatic activity at the cellular level, while repairing DNA.

Of undeniable effectiveness, phycocyanine, this blue pigment from seaweed, is the food supplement of the future. Harvested in extraordinary environments (thermal cures at over 70 degrees, polar zones, etc.), its various actions on health make this molecule a real therapeutic gem.

Phycosens is available in the form of liquid ampoules highly concentrated in phycocyanin.