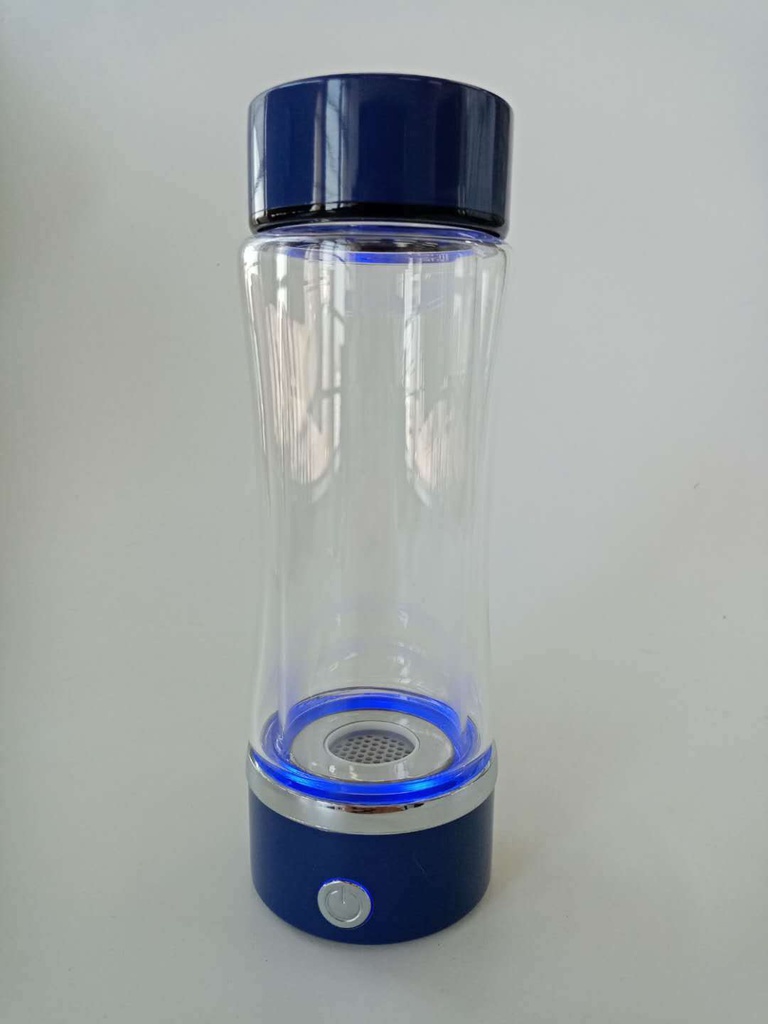 Ydrogen2O is a bottle that gives you anti-oxidizing water thanks to its hydrogen generator. Drinking hydrogenated water is ideal to prevent aging.

We are hearing more and more about hydrogen, hydrogenated water, etc. In recent years, hydrogenated water and molecular hydrogen have been the subject of numerous pharmaceutical and cosmetic studies. At wellness and natural health fairs, various devices for hydrogenating drinking water have also appeared. Some laboratories also offer products to be mixed in water in order to provide the body with extra hydrogen.

Why does hydrogen seem so important to the body?

Let's explain in a few words what molecular hydrogen consists of and what is the interest of this omnipresent atom in our universe.

Hydrogen is the most abundant chemical element in our universe. It is found in the stars and in the heart of gaseous planets. Associated with oxygen, hydrogen is at the origin of all the elements of the universe. In our bodies, hydrogen is also ubiquitous since two of its atoms are linked to an oxygen atom to form water molecules. Let's remember that water constitutes 99% of the molecular components of our body. The water molecule contains the whole principle of the duality of our universe (Yin/Yang) since it has both a positive and a negative pole. The water molecule is both acidic and basic. It can be oxidizing or reducing according to needs and circumstances. This magical bipole, which functions essentially by electromagnetism, is the best carrier of information at the heart of our body.

While the properties of the oxygen atom and the biochemical reactions that involve it in our bodies have been studied in depth, molecular hydrogen has rather been neglected. Only a few researchers have been interested in it since the 1790s. In 1975, its use in the medical and therapeutic field was again highlighted in an academic paper by the departments of chemistry and biology of Baylor and Texas A&M.

Research continued very slowly until 2007, when the antioxidant assets of molecular hydrogen were finally discovered. This was illustrated in an article in Nature Medicine magazine. From then on, the biomedical field began to focus its interest on molecular hydrogen.

Hydrogen in the body

In our body, molecular hydrogen is mainly present thanks to water since a water molecule is made up of one oxygen atom and two hydrogen atoms.

To date, research carried out on hydrogenated water shows that it is a real antioxidant, which slows down the aging process considerably.

This hydrogen molecule, which is the smallest and lightest element in the universe, has 3 properties of its own. These help explain the therapeutic effects of this molecule.

This type of water was first produced in Japan and South Korea. The purpose of this combination was then to combat the effects of radiation and all forms of cancer. After that, research on the benefits of hydrogenated water continued.

Medical tests using hydrogenated water as a drug were then carried out in order to develop protocols for diabetes, hepatitis and certain forms of dermatitis. Subsequently, hydrogenated water was used to prevent and treat depression, as well as for detoxification.

It is currently used in the cosmetic sector and particularly in the prevention of aging.

The powerful antioxidant effects of hydrogenated water allow an effective fight against free radicals. Free radicals result from the oxidation-reduction processes inherent to cellular life (respiration, digestion, etc.). From these cellular electron transfers and losses emanate oxidizing cells called free radicals. These free radicals in turn cause chain reactions that are toxic to the body, resulting in premature cell aging.

To counteract the effects of these free radicals, the body needs antioxidant materials, but it does not generate them by itself. Antioxidants are provided through food (fruits, vegetables containing minerals and various nutrients).

Drinking hydrogenated water is a simple way to supply the body with antioxidants.

Consuming antioxidant principles allows to neutralize free radicals, but not only...

Antioxidant principles provide many other positive health effects, such as strengthening the entire immune system for example.

Thanks to its antioxidant effects, molecular hydrogen also regulates certain physiological reactions such as inflammatory processes or apoptosis (programmed death of cells that have become useless, aged or malformed).

During the tests, molecular hydrogen was used in different forms:

● Inject into a saline solution.

The effects observed were as follows :

● Regulation of blood pressure and circulation,

● Mitigation of arthritic signs and back pain,

● Optimization of muscle and joint function,

The benefits of molecular hydrogen

- Metabolic Syndrome :characterized by a combination of obesity, insulin resistance, hypercholesterolemia and hypertension. People with these conditions are at high risk for cardiovascular disease and diabetes. Regular consumption of molecular hydrogen for 8 to 10 weeks significantly reduces the symptoms and risks associated with the metabolic syndrome, including cholesterol levels.

- Diabetes and prediabetes : As in the metabolic syndrome, diabetics and pre-diabetics most of the time have very high LDL levels. Molecular hydrogen has demonstrated a very significant action on these at-risk blood levels as well as on the regulation of glucose tolerance allowing a true return to normal.

- Support during cancer treatments :  of people undergoing radiation therapy for cancer also have molecular hydrogen. This has given them a real reduction in fatigue (very often marked during this type of treatment) as well as a reduction in oxidative blood markers, but above all a very clear improvement in their quality of life.

- For sportsmen and women, because it helps to maintain the body's hydration during the effort, but also afterwards. Populations of high-performance athletes have observed marked improvements in their sports performance and physical abilities. This is primarily due to the fact that molecular hydrogen assists the cells in their production of the necessary energy. Secondly, molecular hydrogen accelerates the recovery process by allowing the faster elimination of lactic acid generated during the effort.

- In pregnant women : Molecular hydrogen helps reduce the risk of neonatal cerebral hypoxia (lack of oxygen supply to the baby's brain during delivery).

Hydrogenated water can be consumed daily at a rate of 0.5 to 1.5 liters. However, it does not replace drinking water. It was designed primarily as a product with positive health benefits. Only very high level athletes should consume 1.5 L of hydrogenated water.

Molecular hydrogen consumed in the form of hydrogenated water has the following advantages :

We now know that molecular hydrogen activates metabolism. It seems that it acts mainly on fat metabolism. If we wish to obtain an action on the metabolism of sugars, it will obviously be necessary to combine its consumption with a healthy and balanced diet and regular physical exercise. Even if you are not used to it, molecular hydrogen will help to establish it since it provides the body with energy and endurance. It will also help to eliminate stress and find a new rhythm of life. It is obvious that, regardless of the dietary supplement consumed or the natural tool used, for the effects to be visible and lasting, it is essential to move towards a healthy and balanced lifestyle.

For some time now, we have been seeing the appearance of bubbling baths that diffuse molecular hydrogen. You should know that it probably takes 7 minutes on average for hydrogenated water to penetrate the body through the skin.

The quality of the water must meet "drinking water health standards". The ideal bottled water is mineral water. Do not fill with tea, fruit juices, drinks or any other chemical solution, in order not to damage the electrolyser.

The operating temperature must be controlled below 60°C, you can use hot water at 80-95°C for rinsing and disinfection.

To avoid electric shock from water, clean the base with a dry cloth.

The lid can be unscrewed for removal. Wash with hot water and/or a few drops of white vinegar.

After a certain period of time, the bottle may show small deposits of limestone on the walls. It is recommended to heat water to 40°C with a little white vinegar and soak the solution in the bottle for 10 minutes. Then rinse with water several times.

This is a preview of the recently viewed products by the user.
Once the user has seen at least one product this snippet will be visible.